Jane Lim's Newsletters about her health book (fungus and cancer) series of "The Most Common, The Most Deadly".

What is the life-purpose of Cyberhackers and Biohackers?

Anyone participating in or linked to hacking must be aware that the cybercrime is subject to death penalty or life imprisonment in some countries such as the U.K., China, and Nigeria. Computer Misuse Act (CMA, hacking legislation) via the Serious Crime Act (SCA) 2015 in the U.K. will soon be adopted by many countries because more countries will eventually realize that those three countries made a supreme decision since they are protecting their citizens from foreign cybercrim

If two facts complete a cause and effect, the cause and effect must be ruled without discretion in vaccine courts. A justice must not abuse discretion to deny a scientific fact because it lacks qualification to do so. One fact is that the ingredient of vaccines is fungi (yeast). The other fact is that autism has been reportedly treated by antifungal medicines. These two facts alone are the best evidence that vaccines which are made of fungal gene (yeast) are the cause of 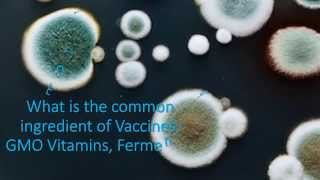 What is the common ingredient of Vaccines, GMO Vitamins, Fermented Foods, and Cancer?

The connections between Vaccines, GMO Vitamins and Autoimmune Diseases